Sunset from the 13th green

The summer solstice marks the longest day, the shortest night and the beginning of summer - so with the weather as good as it gets,  I headed over the Campsie hills to Balfron Golf Society, a course I've driven past many times but never set foot on.

Situated just 6 miles from the Loch Lomond and Trossachs National Park, 20 miles north of Glasgow and the same distance west of Stirling, this is a beautiful spot. The golf course sits at the top of the picturesque village of Balfron, just beyond the Clachan Oak. Legend has it that this ancient Sessile Oak tree was once a resting place for William Wallace and a hiding place for Rob Roy MacGregor.

Like the oak, golf is not new in Balfron. There had been a 9 hole course at the top of the village for many years until the coming of the second World War in 1939, when the Balfron Golf Club was dissolved and the land given up for agricultural use. In 1991 Balfron Golf Society was formed and plans were put in place to re-create a nine hole course on the site of the original one, which opened in the summer of 1994. Adjoining land was purchased in 1997 and the course extended to 18 holes, opening in June 2001.

The opening hole is a short Par 4 at just 298 yards, but not without difficulty, as the approach shot is played from either on top of the hill or from the bottom of the gully to a raised green that sits perpendicular to the fairway.

The 520 yard Par 5 second hole allows you to open the shoulders and give the ball a good hit, particular as the latter part of the hole is played uphill.  Only big hitters will get home in two here.

The following stretch of holes is fairly gentle and meanders clockwise in a loop around open ground giving you the first fine views over the surrounding farmland to Ben Lomond and the mountains further north.

The 8th hole at 337 yards is a highlight of the front 9. The tee shot is semi-blind, played to (or over) the brow of the hill a couple of hundred yards away. This leaves you with a short approach shot, possibly from a hanging downhill lie, over a valley to a green that is angled to the right and guarded by two bunkers front right. The best approach is from the left side of the fairway, but go too far left off the tee and knee high rough awaits. Go right and you are left with a tricky shot in over the bunkers.  A new medal tee built up some 40 yards back in the deep rough, reminiscent of championship tees at Open venues, will make this an even more interesting hole.

Holes 9, 10, 13, 14 and 15 make up the finest stretch of holes, running back and forth on the gently sloping north east part of the property, weaving through knee deep purple flowering grass. Each of these holes would not be out of place on many a championship course. The uphill 9th, a Par 5 just shy of 500 yards with a slight dogleg, sits alongside the downhill but  strong 429 yard Par 4 10th.

The 13th is a visually stunning short Par 4 played up to the highest point of the course. A fairly simple tee shot is followed by an approach shot played over six large cross bunkers, set out in two rows of three (think Gleneagles King's course), to the flagstick standing as a sentinel against the sky. If the weather is fair, take a few minutes and rest here by the viewpoint cairn to the left of the green. Enjoy picking out the array of southern highland peaks on the horizon as far as the towering pyramid of Ben More, a Munro and 16th highest mountain in Scotland, some 40 miles away. The 360 degree information disc also points out the key features of the Campsie hills which dominate the skyline not far distant in the opposite direction. You will recognise the names from the scorecard, as the holes here are named after many of these hills and local features.

Having taken in the view attention now turns to the excellent 14th 'Dumgoyne', named after the prominent and most popular hill for walkers in the Campsies. This excellent Par 3 of 183 yards is played towards the hills, across a gully, to an exposed green site that's set side on to the tee. Out of bounds lurks just beyond the green, the boundary of the course marked by a dry stone dyke. A fun challenge on a calm day, a veritable test of nerve on a windy day. 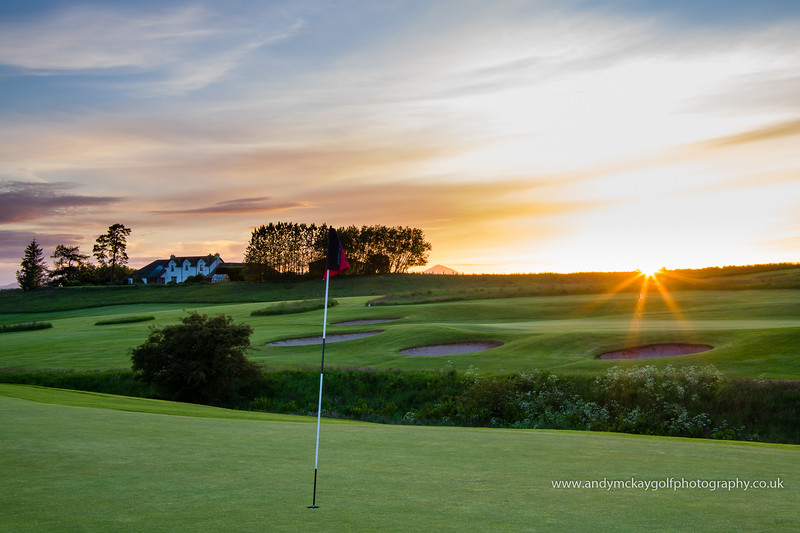 The third Par 5 on the course is the 15th. At 520 yards it's the same length as the 2nd hole, but this time played downhill and is brilliantly designed. An inviting tee shot is followed by a more tricky approach. A  burn emerges from the ground on the left edge of the fairway at around 290 yards and snakes it's way in a series of small s-curves the remainder of the way to the hole, bisecting the fairway along the front edge of the green. A layup to the right of the burn is made harder by the ground sloping down towards the water.

The last hole of note is the 17th, a 456 yard downhill par 4. Once again the test is on the approach shot, played from high ground down to a narrow hour-glass shaped green. A burn runs diagonally across the fairway 30 yards short of the green, then continues it's path tight to the left side of the green and adds to the difficulty and visual appeal of this excellent approach. A bunker and high ground to the right make a bale out and unattractive option. The green itself is some 40 yards deep and on three levels, giving several excellent pin positions and options for extending or shortening the hole.

Heading for home the 18th is an almost 45 degree dogleg Par 4 which calls for a solid drive over thick rough and avoiding the out of bounds left at the corner of the dogleg. From there it's a short iron approach to a hidden green with a steep down slope at the front.

Having enjoyed your round, have a seat outside the simple but delightful log cabin that doubles as the clubhouse and chat about a good few hours spent in one of the most peaceful and beautiful corners of Scotland.

18th fairway looking back to the 17th green